<< back to the index

In Memory of Jan van Gooswilligen 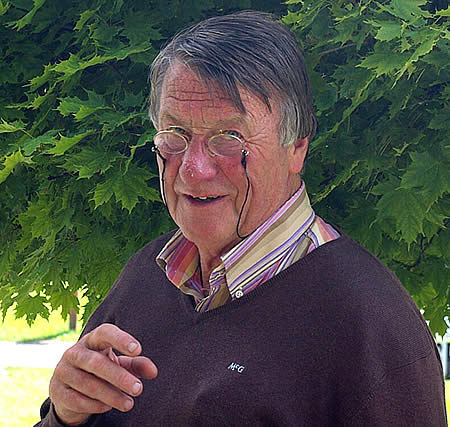 Jan van Gooswilligen, one of the founders of Nepalimed Holland, died in his hometown De Wijk on 19 December 2008 at the age of 73.
Jan was born and bred in Bilthoven. He was passionate about sports. He played in the Dutch National Hockey Team 58 times, 38 times of which as captain. When playing in the SCHC team (Stichtse Cricket- en Hockey Club), they won the national championship. He played in the Olympic Games in Rome (1960) and in Tokyo (1964). For many years he organised the Dutch cycle racing championship for physicians in the town of De Wijk.
Jan was a fanatic skater. He skated the Elfstedentocht (a skating race past eleven towns in Friesland) in 1954,1956 and 1986. In 1963 a policeman ordered him to get off the ice in Harlingen (this because he was too late).
After Jan had become a doctor, he obtained his doctorate with a thesis on the influence of working out on a group of soldiers and he specialised in urology. He expanded the specialism of urology in the Diakonessenhuis in Meppel. Jan managed to combine his passion for sports with his medical knowledge and together with his wife Ammy he founded the SMA (Sportmedical Advice Centre). Many sportsmen, numerous top sportsmen among them, were counseled at this centre in the hospital.
Together with Ammy he visited Nepal in 1997. Jan and Ammy, both doctors, saw the pain and poverty suffered by the Nepalese people and they decided to search for a substantial way in which to contribute to the Nepalese health care. On their way through the Kingvalley they visited Dhulikhel Hospital which is not only well-organised but also financially sound. Together with the young doctor Ram Shrestha, surgeon and managing director of the hospital, they decided to contribute to this hospital. Nepalimed Holland was founded.
Because of the couple’s headlong dedication many activities were developed during the past 10 years, the proceeds of which go to the various projects and to the building of several parts of the hospital.
The spearheads of Nepalimed Holland are:

Jan van Gooswilligen was the initiator of the annual Golftournament for firms that –by buying a hole- sponsored Nepalimed. The firm would invite people to come and play with a top sportsman leading the flight.
The work for Nepalimed has not come to an end; Jan’s wife Ammy will continue its activities.
Not only for Nepalimed did Jan van Gooswilligen leave a great void; especially for his wife Ammy, his children and grandchildren the death of their beloved husband, father and grandfather will be a heavy burden.
It is with deep respect and gratitude that we remember Jan van Gooswilligen.

<< back to the index